The Crying of Lot 49

The Crying of Lot 49, published in 1966, is Thomas Pynchon's second novel. The shortest of Pynchon's novels and often considered his most accessible, the book is about a woman, Oedipa Maas, possibly unearthing the centuries old conflict between two mail distribution companies, Thurn und Taxis and the Trystero (or Tristero). The former actually existed, and was the first firm to distribute postal mail; the latter is Pynchon's invention.

Oedipa Maas - The novel's protagonist. After her ex-boyfriend, Pierce Inverarity, names her co-executor of his estate, she discovers and begins to unravel a worldwide conspiracy. Oedipa functions in the novel as a type of detective, trying to find out the meaning behind Trystero in the play The Courier's Tragedy.

Pierce Inverarity - Oedipa's ex-boyfriend and a wealthy real-estate tycoon. The reader never meets him directly: all encounters are presented through Oedipa's memories. At the beginning of the novel he is already dead and is said to have been extremely rich, having owned, at one time or another, a great deal of real property and holdings in California.

Mucho Maas - The husband of Oedipa, Mucho once worked in a used-car lot but recently became a disc jockey for KCUF radio in Kinneret, California (a fictional town). Towards the end of the novel, the effects of his nascent LSD use alienate Oedipa.

Metzger - A lawyer who works for Warpe, Wistfull, Kubitschek and McMingus law firm. He has been assigned to help Oedipa execute Pierce's estate. He and Oedipa have an affair.

Miles, Dean, Serge and Leonard - The four members of the band called The Paranoids. They serve as a means of satirizing the southern Californian youth hippie culture in the mid 1960s.

Dr. Hilarius - Oedipa's psychiatrist, who prescribes LSD, which she does not take, to Oedipa as well as other housewives. He goes crazy toward the end of the story. Admitting to being a former Nazi doctor at Buchenwald, he holes up in his office, but is taken away peacefuly by the police after Oedipa disarms him.

John Nefastis - A scientist obsessed with perpetual motion. He has tried to invent a type of Maxwell's Demon, trying to create a perpetual motion machine. Oedipa visits him to see the machine after learning about him from Stanley Koteks.

Stanley Koteks - An employee of Yoyodyne Corporation, Oedipa meets him when she wanders into his office while touring the plant. He knows something about the Trystero, but he refuses to say what he knows.

Randolph Driblette - The director of the production of Wharfinger's The Courier's Tragedy seen by Oedipa and Metzger. Driblette is a leading Wharfinger scholar, but he commits suicide before Oedipa can extract any useful information from him about Wharfinger's mention of the Tristero. Oedipa's meeting with Randolph after the play, however, sparks her to go on a quest to find the meaning behind Trystero.

After being defeated by Thurn und Taxis in the 1700s, the Tristero organization goes underground and continues to exist, with its mailboxes in the least suspected places, often appearing under their slogan W.A.S.T.E., an acronym for We Await Silent Tristero's Empire, and also a smart way of hiding their post-boxes disguised as regular waste-bins. In the plot of the novel, the existence and plans of the shadowy organization are revealed bit by bit, or, then again, it is possible that the Tristero does not exist at all. The novel's main character, Oedipa Maas, is buffeted back and forth between believing and not believing in them, without ever finding firm proof either way. The Tristero may be a conspiracy, it may be a practical joke, or it may simply be that Oedipa is hallucinating all the arcane references to the underground network, that she seems to be discovering on bus windows, toilet walls, et cetera. 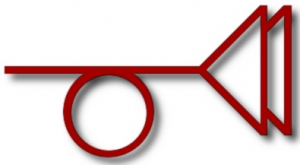 Prominent among these references is the "Trystero symbol", a muted post horn with one loop. Originally derived, supposedly, from the Thurn and Taxis coat of arms, Oedipa finds this symbol first in a bar bathroom, where it decorates a graffitto advertising a group of polyamorists. It later appears among an engineer's doodles, as part of a children's sidewalk jump rope game, amidst Chinese ideograms in a shop window, and in many other places. The post horn (in either original or Trystero versions) appears on the cover art of many TCL49 editions, as well as within artwork created by the novel's fans.

Oedipa finds herself drawn into this shadowy intrigue when an old boyfriend, the California real estate mogul Pierce Inverarity, dies. Inverarity's will names her as his executor. Soon enough, she learns that although Inverarity "once lost two million dollars in his spare time [he] still had assets numerous and tangled enough to make the job of sorting it all out more than honorary." She leaves her comfortable home in Kinneret-Among-The-Pines, a northern California village, and travels south to the fictional town of San Narciso (Spanish for "Saint Narcissus"), near Los Angeles. Exploring puzzling coincidences she uncovers while exploring Inverarity's testament, Oedipa finds what might be evidence for the Trystero's existence. Sinking or ascending ever more deeply into paranoia, she finds herself torn between believing in the Trystero and believing that it is all a hoax established by Inverarity himself. Near the novel's conclusion, she reflects,

He might have written the testament only to harass a one-time mistress, so cynically sure of being wiped out he could throw away all hope of anything more. Bitterness could have run that deep in him. She just didn't know. He might himself have discovered The Tristero, and encrypted that in the will, buying into just enough to be sure she'd find it. Or he might even have tried to survive death, as a paranoia; as a pure conspiracy against someone he loved.

Along the way, Oedipa meets a wide range of eccentric characters. Her therapist in Kinneret, a Dr. Hilarius, turns out to have done his internship in Buchenwald, working to induce insanity in captive Jews. "Liberal SS circles felt it would be more humane," he explains. In San Francisco, she meets a man who claims membership in the IA, Inamorati Anonymous—a group founded to help people avoid falling in love, "the worst addiction of all". (Ironically, the anonymous inamorato wears a lapel pin shaped as the Trystero post horn, which Oedipa first saw on an advertisement for group sex.) And, in Berkeley, she meets John Nefastis, an engineer who believes he has built a working version of Maxwell's Demon, a means for defeating entropy. The book ends with Oedipa attending an auction, waiting for bidding to begin on a set of a rare postage stamps, which she believes representatives of Tristero are trying to acquire. (Auction items are called "lots"; a lot is "cried" when the auctioneer is taking bids on it; the stamps in question are "Lot 49".)

Pynchon devotes a significant part of the book to a "play within a play", a detailed description of a performance of an imaginary Jacobean revenge play, involving intrigues between Thurn und Taxis and Tristero. Like the Mousetrap which Shakespeare placed within Hamlet, the events and atmosphere of The Courier's Tragedy (by "Richard Wharfinger") mirror those in the larger story around them.

As in his earlier novel, V., Pynchon seems to be making a point about human beings' need for certainty, and their need to invent conspiracy theories to fill the vacuum in places where there is no certainty. Also, as he had in V., Pynchon laces the book with original song lyrics and outrageously named characters—e.g., Genghis Genghis Cohen, Manny DiPresso. "Mike Fallopian cannot be a real character's name," protests one reviewer. [1]

Some have hypothesized that Pynchon was influenced by the racial tensions in southern California that would later turn into riots across the country. Critics have read the book as both an "exemplary postmodern text"[2] and an outright parody of postmodernism.[3] Pynchon himself disparaged this book, writing in 1984, "As is clear from the up-and-down shape of my learning curve, however, it was too much to expect that I'd keep on for long in this positive or professional direction. The next story I wrote was The Crying of Lot 49, which was marketed as a 'novel,' and in which I seem to have forgotten most of what I thought I'd learned up until then."[4]